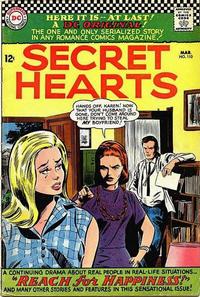 If You Ever Leave Me Again! (Table of Contents: 1)

First Line of Dialogue or Text
How can a girl live under the never-ending fear that the one she loves will leave her again? How long can she go on, making half-meant, half-completed threats, like...
Genre
romance
Synopsis
Paula's boyfriend Brad claims to love only her, but he often pays a lot of attention to other girls and ignores Paula.
Reprints

My One and Only Love (Table of Contents: 3)

First Line of Dialogue or Text
The decision was mine to make... I could be a glittering star in the Broadway galaxy, or I could be Hal's wife. But how could I relinquish the dream of a lifetime?
Genre
romance
Synopsis
Aspiring actress Kit falls in love with her director, Hal, but when he asks her to marry him he insists that she give up her career.
Reprints

The Invisible Handicap! (Table of Contents: 4)

Genre
advocacy
Synopsis
The class gets a lesson on not making fun of those who are different.

First Line of Dialogue or Text
You made your choice years ago! Now that you've lost your man--don't come here trying to steal mine!
Genre
romance
Characters
Karen Summers; Lila Smathers; Roger Smathers; Peggy Wilder; Dr. Greg Marsh; Rita Phillips; Frankie Summers (flashback)
Synopsis
Karen returns to her hometown after her husband Frankie, a Hollywood star, dies in a car accident. Her sister Peggy blames her for the death of their mother, and though her former fiancee Greg is now involved with Rita, he still seems to have feelings for Karen.
Reprints

script credit suggested by the Who's Who of American Comic Books