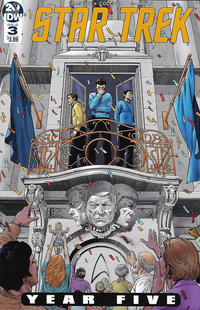 The Enterprise previously visited Sigma Iotia II in the original series episode "A Piece of the Action". The Iotians viewed Earth history from data contained in McCoy's lost communicator, including images of Khan Noonien Singh, who tried to take over Earth with his Augments as detailed in the episode "Space Seed", Zefram Cochrane's meeting with Vulcans as detailed in the movie "Star Trek: First Contact", and Jonathan Archer, captain of Earth's first warp five starship, as seen in the series "Enterprise".