On-sale date from ad in All-American Men of War #114 and copyright registration. 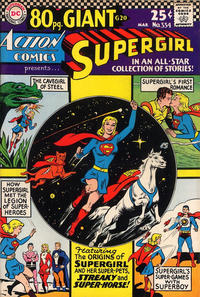 The Supergirl from Krypton! (Table of Contents: 2)

Genre
superhero
Characters
Superman [Kal-El; Clark Kent]; Supergirl [Kara Zor-El] (introduction, first appearance, origin); Zor-El (introduction); Miss Hart (introduction)
Synopsis
Superman spies a crashing rocket and discovers his cousin Supergirl. She tells him how Argo City survived the destruction of Krypton and how her father sent her to Earth when the inhabitants of Argo City were threatened by Kryptonite poisoning. Superman sets her up in Midvale Orphanage so she can adjust to life on Earth.
Reprints

The Cave-Girl of Steel! (Table of Contents: 5)

Genre
superhero
Characters
Supergirl [Linda Lee]; Streaky (first appearance); Miss Hart
Synopsis
Supergirl recovers a small Kryptonite meteor and unsuccessfully tries to find a chemical way to render it harmless. Later, Linda saves a stray orange cat from a dog. The cat follows her to the orphanage where Linda is given permission to keep him. Because of the white markings on his side, she calls him Streaky. Streaky discovers the piece of discarded Kryptonite, and receives super-powers from it. Streaky feeds some stray cats by tipping over a milk truck and chases off a bullying dog. Eventually his "meows" attract Supergirl and the two have some super-fun before Streaky's powers fade away.
Reprints
Keywords
Midvale Orphanage; X-Kryptonite

The Three Super-Heroes! (Table of Contents: 11)

Genre
superhero
Characters
Superboy; Supergirl; Superman; Zor-El (flashback)
Synopsis
Supergirl goes back into the past to meet Superboy, so he can have a super playmate.
Reprints
Keywords
Argo City; time travel

The Super-Steed of Steel! (Table of Contents: 14)

This is not the first appearance of Comet; see Adventure Comics #293 (February 1962).

The Origin of Super-Horse (Table of Contents: 15)

Do You Make Life Hard for Yourself? (Table of Contents: 16)

Published in cooperation with the National Social Welfare Assembly.
Previously appeared in DC comics cover-dated May 1959.