First printing with second cover.
This issue is a variant of The Sandman: The Doll's House (DC, 1990 series) #[2] [First Printing]. There exist further variants: 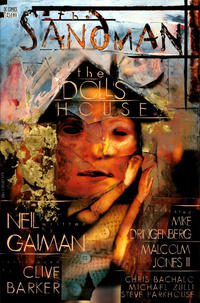 Various text pieces from the Volume. The Morpheus face is from the cover.

The Sandman (Table of Contents: 2)

First Line of Dialogue or Text
May We...
Characters
Morpheus; Rose Walker
Reprints

The Sound of Her Wings [Master of Dreams Part 8] (Table of Contents: 7)

Tales in the Sand [Master of Dreams Part 9/ A Doll's House Prologue] (Table of Contents: 9)

Of the issues reprinted in this volume, this is the only one with an editing credit for Tom Peyer, and no credit for Art Young.

Biographies of the authors

Same illustration from the cover art.