8 Against Eternity! (Table of Contents) 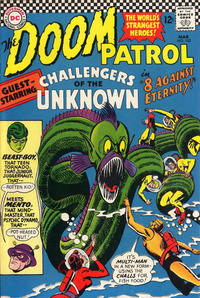 Inside front cover; published in cooperation with the National Social Welfare Assembly.
Previously appeared in DC comics cover-dated May 1959.

Story continues from Challengers of the Unknown (DC, 1958 series) #48.

Christmas in January from AMT! (Table of Contents: 4) (Expand) /

Job Number
6361
First Line of Dialogue or Text
Mom, can I use your hair dryer?
Genre
non-fiction

Letters from Kris Kessler, Kathy Ludlum, Leonard Tirado and excerpts from other letters.

[8 Against Eternity] Part 2: The Zombies of Atlantis (Table of Contents: 10)

The Flash / promo (ad from the publisher) / 0.33 page (report information)