On-sale date from ad in Sea Devils #28 and copyright registration.

Beyond the Sinister Barrier (Table of Contents) 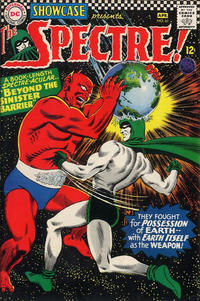 This item appears on the inside front cover, in black and white. In the title, the word "You" is underlined.

Beyond the Sinister Barrier! (Table of Contents: 2)

Here Are Some Tips on How to Get Started Building Better Models! (Table of Contents: 4)

Job Number
6365
Characters
Cap
Synopsis
Formerly the humor cartoon Cap's Hobby Shop, the feature turns serious, here giving some general helpful tips to model enthusiasts. It also asks readers to send in their own, with those whose submissions are depicted receiving $5.00 and the original artwork. The vast majority of subsequent entries would be based on readers' submissions.

This item appears on the top half of the page following Sequence 3, with Sequence 5 below it.

Genre
non-fiction
Synopsis
A description of the distinctions between the three titular weather phenomena.
Reprints

Statement of Ownership, Management and Circulation (Table of Contents: 7)

This appears on the bottom third of the main story's page 16.

First Line of Dialogue or Text
With this second showcasing of The Spectre...
Synopsis
One reader's letter each from David Anderson, Andrew Fraknoi, Paul Seydor, Leonard Tirado, after an editorial introduction, on the two Dr. Fate/Hourman team-ups in Showcase #s 55 & 56, and the Starman/Black Canary ones in Brave & Bold #s 61 & 62.