The Gorilla Witch! (Table of Contents) 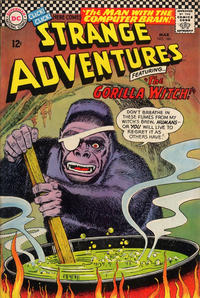 Inside front cover. Published in cooperation with the National Social Welfare Assembly.
Previously appeared in DC comics cover-dated May 1959.

Genre
adventure; horror-suspense
Synopsis
A jungle explorer seeks a fabled potion that will allow him to communicate with animals, but it actually turns him into a mindless gorilla and gives his human mind to a gorilla who plans a revolution.

Challengers of the Unknown / promo (ad from the publisher) / 0.33 page (report information)

[Six Years Without Food or Water?] (Table of Contents: 5)

The Man with the Computer Mind! (Table of Contents: 7)

Genre
science fiction
Synopsis
A computer programmer works so diligently at his job that his brain begins to work like a computer, which allows him to help the local police solve crimes.
Reprints

The Invasion from the Time Warp! (Table of Contents: 10)

First Line of Dialogue or Text
Is your airplane collection taking up too much room?
Genre
non-fiction