First Line of Dialogue or Text
We do have a title for this thriller... honest!!
Genre
spy; superhero
Characters
The Fixer; Mentallo; SHIELD; Nick Fury
Reprints 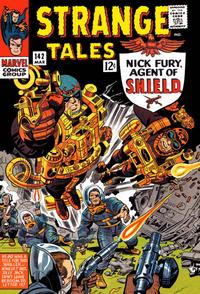 Genre
spy; superhero
Characters
Nick Fury; "Wild Bill" Robot; E.S.P. Division; Mentallo; The Fixer
Synopsis
Fury checks out the Encephalogram-Inducer which, when hooked into the Brainwave Stimulator transforms the ESP Divisions' thoughts into images. Mentallo breaches The Fixer's underwater base, convincing him to join forces. They travel underground to SHIELD HQ in a Thru-The-Ground Tank which The Fixer mentions was supplied by THEM. Inside SHIELD HQ, the Fixer uses a Static Distorter to cut off outside communications. Mentallo & The Fixer take on Fury & SHIELD using Element Z to render everyone unconscious. Placing an electronic mask on Fury's face, The Fixer turns him into a mindless slave.
Reprints

Part 2 of 3. Story occurs concurrently with TALES OF SUSPENSE #75 (March 1966). First mention of "THEM." Fixer's "Thru-The-Ground-Tank" strikingly similar to the ones used by The Hate Monger in FANTASTIC FOUR #21 (December 1963) and The Rabble Rouser in STRANGE TALES #119 (April 1964), suggesting a connection between them and "THEM."

The Latest Gossip, Gags, and Gizmos From Your Bullpen to You! (Table of Contents: 2) (Expand) /

Those Who Would Destroy Me! (Table of Contents: 3)

Genre
superhero; fantasy-supernatural
Characters
Dr. Strange; The Demon (Demonicus, unnamed); The Ancient One; The Witch (Adria, unnamed); Kaecilius (unnamed)
Synopsis
Realizing Mordo's presence has been erased from his sanctum Strange suspects foul play, disposing of a hidden bomb just before it explodes. Stunned by the blast Mordo's minions imprison him so that he cannot use his magic. Strange attempts to telepathically contact The Ancient One, but fails because his spirit form is searching for the missing Clea. While Mordo's minions study Strange's cloak & amulet The Demon tries to probe his mind, but Strange is stronger and instead takes control of him. Fighting desperately Strange barely escapes his captors and remains virtually helpless in spirit form.
Reprints