"Bruce Banner Is the Hulk!" (Table of Contents)

Cover pencils credit changed to Jack Kirby by Mark Evanier, who says (via the GCD Errors list, August 2009) "As far as I know, Kirby never did layouts at Marvel for a cover where someone else did the pencils." Original indexer had "Jack Kirby (layouts); John Romita (pencils)." 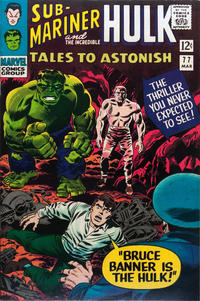 To Walk Amongst Men! (Table of Contents: 1)

First Line of Dialogue or Text
I must inform the Royal Council of my decision to return to the surface world!
Genre
superhero
Characters
Sub-Mariner [Namor]; Henry Pym [Giant Man]; Janet Van Dyne [Wasp]; Lady Dorma; Vashti the Elder
Synopsis
When earthquakes rock Atlantis, Namor heads to the surface to find out what is causing the mayhem. What he finds is a giant drill being utilized by Hank Pym as he searches for clues to the origins of life on Earth.
Reprints

The Latest Gossip, Gags, and Gizmos from Your Bullpen to You! (Table of Contents: 2) (Expand) /

Bruce Banner Is the Hulk! (Table of Contents: 3)

First Line of Dialogue or Text
Back, you brainless gargoyle!
Genre
superhero
Characters
Hulk [Bruce Banner]; Thunderbolt Ross; Betty Ross; Rick Jones; Glenn Talbot; Executioner [Skurge] (villain); King Arrkam (villain)
Synopsis
The Hulk and the Executioner battle for the fate of the future earth and once the Asgardian is defeated, the Hulk returns back to his own time. Hounded by the military and thinking that Banner and the Hulk are dead, Rick tells Talbot the secret of the Hulk's alter ego.
Reprints

The story offers little in the way of explanation as to exactly why an immortal from Asgard is trying to conquer the future earth.

First Line of Dialogue or Text
Talk about surprises!
Reprints