If Iceman Should Fail! (Table of Contents)

Disputed penciler credit--Jack Kirby (layouts) Werner Roth (pencils) per Rich Donnelly, Steve Whitaker, and Bob Ford. Bob Ford asserts that someone other than Jack Kirby or Dick Ayers modified Magneto's face. Nick Caputo believes that the Magneto figure was pencilled by Kirby and the rest of the cover by Roth (GCD Error List 29 March 2007). Sol Brodsky inking credit added per Nick Caputo, Jan 1, 2011. Nick adds that according to Mark Evanier kirby rarely, if ever, provided cover layouts for other artists. 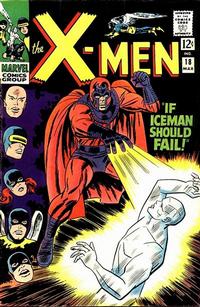 If Iceman Should Fail--! (Table of Contents: 1)

First Line of Dialogue or Text
One by one, the X-Men have been defeated-- by the most powerful, the most deadly foe of all!
Genre
superhero
Characters
X-Men [Professor X; Cyclops; Jean Grey; Angel; Beast; Iceman]; GUESTS: Mr. Worthington; Mrs. Worthington; VILLAINS: Magneto; Toad; CAMEO: Stranger
Synopsis
With the rest of the X-Men captured in a locked gondola beneath an ascending balloon, it is up to an injured Iceman to battle Magneto on his own. Once the X-Men escape Magneto's trap, Professor X calls the Stranger who arrives on Earth to collect his former captive.
Reprints