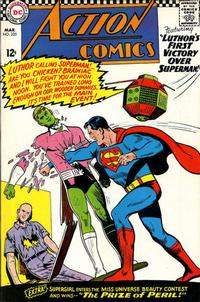 Characters
Betsy; Bobby
Synopsis
Betsy tells young Bobby that he should keep his room neater but realizes that she has the same problem.

Inside front cover; published in cooperation with the National Social Welfare Assembly.
Previously appeared in DC comics cover-dated May 1959.

story continued from the previous issue

The Prize of Peril (Table of Contents: 7)

Genre
superhero
Characters
Supergirl [Kara Zor-El; Linda Danvers]; Dick Malverne; Edna Danvers; Fred Danvers; Stan Wellwood; Jak-Thal; Zilya
Synopsis
Linda Danvers cheats to win the Miss Universe contest when she learns that the winner will be taken from Earth and forced to compete in an interplanetary beauty contest. She wins the Miss Cosmos contest as well, but the "prize" is to be transformed into an ugly freak.
Reprints
Keywords
beauty contest

story continues in the following issue