Popnecker the Pilgrim! (Table of Contents) 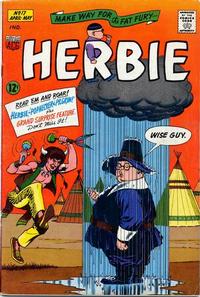 Popnecker the Pilgrim! (Table of Contents: 1)

Herbie and the Spirits! (Table of Contents: 3)

Genre
humor; satire-parody; superhero
Characters
Herbie Popnecker; Mrs. Popnecker; Pincus Popnecker
Synopsis
Herbie is the new kid in school. He proves his bravery by going to a haunted house. Supernatural beings (a witch, a ghost, a creep, and Frankenstein) cause havoc, but prove to be no match for Herbie, his lollipops, or his magic.
Reprints

Herbie looks and talks differently in this pre-Herbie series story.