The Atom-Destruction of Earth! (Table of Contents) 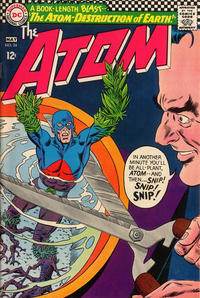 The Atom-Destruction of Earth! (Table of Contents: 1)

Genre
superhero
Characters
The Atom [Ray Palmer]; The Plant Master [Jason Woodrue] (villain); Maya; Sylvanna; Jean Loring
Synopsis
Jason Woodrue escapes from prison and travels to the dimension of Floria, where he plans to rule. Queen Maya enlists the Atom's help again, but they don't know that battling Woodrue may bring about the destruction of Earth.
Reprints

Who Are the Real Kings of Super-Speed? (Table of Contents: 4) (Expand) /

First Line of Dialogue or Text
It takes about 80 acres of woodland...
Genre
non-fiction; math & science
Synopsis
Information on paper making, dust storms, the pigmy shrew and the rate of eating your own weight.
Reprints

Job Number
1371
First Line of Dialogue or Text
Mom, I see you changed the roll of paper towels...
Genre
non-fiction

Statement of Ownership, Management and Circulation (Table of Contents: 9)

Shares the page with page 16 of sequence 1.