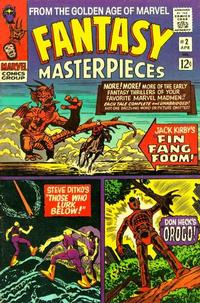 Job Number
V-318
Genre
horror-suspense
Characters
Chan Liuchow; Chung Liuchow; Fin Fang Foom (introduction)
Synopsis
A young historian from Taiwan is scorned by his father for his refusal to join the army, even in the face of an imminent communist invasion. Instead of fighting directly, he crosses to the mainland to awake the dragon Fin Fang Foom. He lures the dragon to the coast to wreck the invasion fleet, and then lures it back to its lair before restoring its mystical slumber.
Reprints
Keywords
monsters

Those Who Lurk Below! (Table of Contents: 2)

Orogo!! The Nightmare from Outer Space!! (Table of Contents: 3)

Jack Kirby penciled the splash page, which was inked by Don Heck.