To Free a Brain Slave! (Table of Contents) 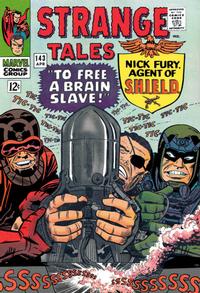 To Free a Brain Slave (Table of Contents: 1)

Genre
spy; superhero
Characters
Dum Dum Dugan; Mentallo; Nick Fury; The Fixer; Gabe Jones; Tony Stark; ESP Division
Synopsis
SHIELD HQ is taken over by Mentallo & The Fixer who hold Fury prisoner. Tony Stark takes command of the combat unit, preparing his Neutralizer while the ESP Division is unable to pick up Fury's thoughts. Meanwhile the villains attach a miniature H-Bomb to Fury's wrists and remove the mind-control mask. Fury is able to send a signal to the ESP team allowing SHIELD to retaliate and Stark's Neutralizer dissolves the H-Bomb. Mentallo & The Fixer are captured with the help of SHIELD's Metronome Unit and the threat of Mentallo's powers is wiped out by the ESP division.
Reprints

Part 3 of 3. Fixer mentions the H-Bomb was supplied by "THEM". Without their helmets, The Fixer & Mentallo bear a striking resemblance to DC's Lex Luthor & Brainiac!

With None Beside Me! (Table of Contents: 3)

Genre
superhero; fantasy-supernatural
Characters
Dr. Strange; The Demon [Demonicus] (unnamed); The Witch [Adria] (unnamed); Kaecilius (unnamed)
Synopsis
Strange hides his bound body in a rooftop water tank, as The Demon & his men search for him. At their HQ, Strange retrieves his Cloak Of Levitation, and uses it to capture one of Mordo's men. But his body has been found by the witch. The complex cat-and-mouse game continues until Strange finally regains control of his body and Amulet, and he hypnotizes Mordo's minions into forgetting all they know of black magic. Now he is free again to focus on the remaining threat of Dormammu, and the missing Clea...
Reprints

Letters from Dan O'Leary, Jeff Weiselberg, and Robert Krug with an accompanying illustration.