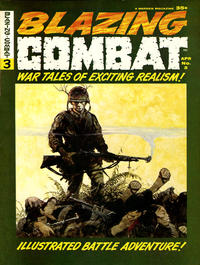 Includes a letter from Richard Kyle.

The Battle of Britain! (Table of Contents: 8)

Genre
aviation; war
Characters
John Bassford (RAF pilot officer); other RAF pilots [Corky; Guy (death); others unnamed] (many die); the Germans (villains, some die)
Synopsis
The German Air Force has been playing the war of attrition with the RAF, and at the current rate, would wipe them out. However, newbie pilot, John Bassford, is eager but terrified when called to do battle in his first mission, and makes several blunders and has to bail out. In his second engagement, the whole squadron is shot down and Bassford is now left alone against the Luftwaffe, being shot down himself. But he has a surprise in store when he awakens from the mission in a hospital.
Reprints
Keywords
Heinkel; Spitfire; the Luftwaffe; World War II

Former Wood assistant, Ralph Reese, strongly disputes Adkins having anything to do with this story. In Fantagraphic's "Atomic Bomb and Other Stories, Illustrated by Wally Wood" (2020), Reese emphatically recalled this story as "some of his (Wood's) best work from that time......that was one that he completely did himself, and I don't think he even had anybody artograph the airplanes for him." When asked by Thommy Burns (for this Fantagraphics' volume) for any additional comments regarding Adkin's claims on this story, Reese added: The "Battle of Britain!" story was a labor of love for Wood, and, as I remember it, he (Wood) wouldn't let anyone else touch it."

Another Wood assistant, Paul Kirchner, states: "A lot of assistants give the impression that they did more work than they did. This has given Wood no small amount of grief. He always has control."

Thus a ? has been placed next to any Adkins credits on this piece. There is too much controversy re this story to completely verify the true situation.

Genre
war
Synopsis
A US Marine in the Pacific during WWII loses his life because of his obsession with collecting dental fillings from dead Japanese.
Reprints
Keywords
Marines; Pacific; World War II