The Day of the Druid! (Table of Contents) 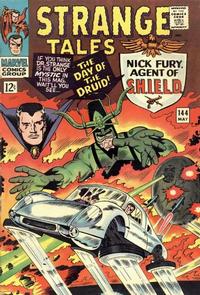 The Day of the Druid! (Table of Contents: 1)

Part 1 of 2. The opening sequence of a mystic rite above-ground while technos supply the goods bears a striking resemblance to the "graveyard" scene in the film LIVE AND LET DIE (1973). First appearance of Jasper Sitwell who was reportedly based on Roy Thomas.

Genre
superhero; fantasy-supernatural
Characters
Dormammu; Clea (unnamed); Dr. Strange; Asti, The All-Seeing; The Ancient One; Tazza
Synopsis
Dormammu uses Asti to lure Strange into an alien dimension where he will be under no vow to spare him. The Ancient One takes Strange to the ruler of a dimension who has senses one of Dormammu's spells in a far-off corner of infinity. There, Dormammu contacts Tazza, and claims that Strange is coming there to kill him. The two battle to a standstill, until Strange convinces Tazza he only seeks information-- and forces the release of Tazza's various prisoners, who are grateful for his help. Both Dormammu & Strange mentally prepare for a coming "final combat" between them.
Reprints