House of Haunts! (Table of Contents)

First Line of Dialogue or Text
It's Spooky! It's Kooky! It's Scrooge and the Beagles in the scary house of haunts!
Genre
anthropomorphic-funny animals; humor
Characters
Uncle Scrooge; The Beagle Boys
Synopsis
A ghostly-glowing Scrooge runs away from the castle of the Mad Duke of Duckburg, while the Beagle Boys gleefully approach it.
Reprints
Keywords
bats; castle; glowing; panic 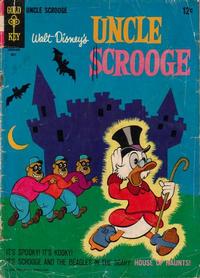 First Line of Dialogue or Text
Drat! This place is too quiet!
Feature Logo

House of Haunts (Table of Contents: 2)

First Line of Dialogue or Text
For months Uncle Scrooge has spent his nights in his Money Bin!
Feature Logo

Uncle Scrooge Western Logo # 1
Genre
anthropomorphic-funny animals; humor
Characters
Uncle Scrooge; Donald Duck; Huey; Dewey; Louie; The Beagle Boys; professorial warden of Studious Hours Prison; Scrooge's psychologist; bank teller; bank guard; judge (owl)
Synopsis
To keep his money safe from the Beagle Boys, Uncle Scrooge surreptitiously hides the cash in the eerie old castle of The Mad Duke of Duckburg. The Beagles get Scrooge to inadvertently lead them to the cash-filled castle, and then give Scrooge a case of amnesia. When the Beagles find themselves imprisoned by the Mad Duke's gauntlet of booby traps, there's no one to remember that they were ever there.
Reprints

The Evil Inventor (Table of Contents: 6)

First Line of Dialogue or Text
Hello-hello... I'm demonstrating the world's zoomiest vacuum cleaner, the Cyclone...
Genre
anthropomorphic-funny animals
Characters
Gyro Gearloose; Emil Eagle; Gyro's Thinking Cap; Sniftor (Gyro's robotic bloodhound); police officer; police sergeant
Synopsis
Disguised as a vacuum cleaner salesman, Emil Eagle pushes his way into Gyro's lab, but is foiled before he can vacuum up Gyro's latest invention plans. Emil later returns dressed as a firefighter, gets Gyro to jump into a fireman's-net-trap, and makes off with a passel of plans. With the help of his thinking cap and robot bloodhound, Gyro tracks Emil and tricks the vain "bald eagle" with a hyperactive hair-growing formula.
Reprints

First appearance of Emil Eagle, who will become a recurring villain throughout various Disney comics in America and abroad. Here, and in his second appearance in Donald Duck (Western, 1962 Series) #109 (September 1966), Emil will be "flesh colored" (likely in reference to his being a "bald eagle" in this story).

With his third and fourth appearances, simultaneously in Donald Duck (Western, 1962 Series) #118 (March 1968) and in the Mickey Mouse serial beginning in Walt Disney's Comics and Stories (Western, 1962 Series) #330 (March 1968), Emil is pictured with "brown feathers" (presumably he invented - or stole - a good baldness cure), and would appear as such for the remainder of the Western Publishing Disney comics run.

In modern European stories, some reprinted in the USA in recent years, Emil Eagle is completely "white".

First Line of Dialogue or Text
Where are we going today, Donald?
Feature Logo

On final interior page of the comic.