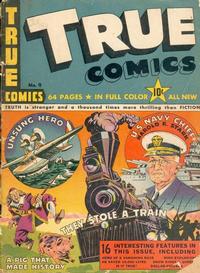 Writer credit was determined by textual analysis by Lou Mougin to be Patricia Highsmith. Now listed as unknown.

Joan Schenkar, writer of the Highsmith biography, "The Talented Miss Highsmith," worked with Highsmith's notebooks, now in possession of the Swiss Literary Archives, and in them, Highsmith did not start working on comics until after she graduated from Barnard College. She joined the Sangor-Pines shop in December, 1942, meaning that no credits before early 1943 can be attributed to Patricia Highsmith (as reported by Ken Quattro on 22 March 2016 in the Comics History Exchange on Facebook).

Hero of a Vanishing Race (Table of Contents: 3)

Mine Explosion (Table of Contents: 4)

They Stole a Train (Table of Contents: 6)

The Count of Frontenac (Table of Contents: 8)

A Pig that Made History (Table of Contents: 11)

Genre
non-fiction
Synopsis
A lawsuit over a pig reorganizes the General Court in Boston.
Reprints

The Cat That Didn't Eat The Canary (Table of Contents: 14)

How Good is Your Memory? (Table of Contents: 17)