This issue and Superman #14 were originally to go on sale on 08/14/19, but less than a week prior to that date, DC asked retailers to destroy all copies of these issues and told them that replacement copies would be sent to go on sale later. Superman #14 was delayed to 08/28/19, while this issue was delayed to 09/04/19. DC's stated reason was that the original issues had covers that featured a "Year of the Villain" logo, but these issues had no ties to that event so they would be re-issued with new covers. This reasoning was questioned, as there was another issue on sale the same week, Catwoman #14, that also had a "Year of the Villain" cover logo and a story that had no ties to the event, and that issue was not recalled. Subsequent speculation centered around the introduction of the new Legion of Super-Heroes in the Superman and Supergirl issues, and the depiction of Lightning Lad's ethnicity. In the published issue, both Lightning Lad and Light Lass are portrayed with a darker skin color, in leaked images of the original printing, their skin color was a lighter shade.

Despite DC's efforts to have all copies of the original printing destroyed, some copies were available on the secondary market. The original printing cover features a "Year of the Villain - Dark Gifts" logo and depicts Supergirl fighting the new Brainiac.
This issue has variants: 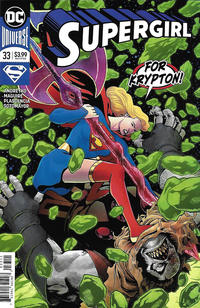 The House of El: United: Finale (Table of Contents: 1)

The Snickers that Snared the Cat! (Table of Contents: 2) (Expand) /