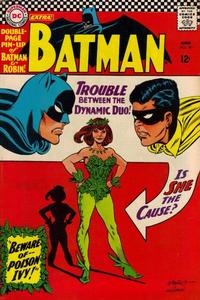 Genre
superhero
Characters
Mystery Analysts of Gotham City [Kaye Daye; Batman [Bruce Wayne]; District Attorney Danton; Martin Tellman; Commissioner James Gordon; Hugh Rankin; Art Saddows]; Nancy Owens (actress); Fern Hunter [also as Kaye Daye] (villain); Hunter's gang [Joe; Chuck; other un-named] (villains)
Synopsis
At the latest meeting of the Analysts, Kaye announces that she didn't write her latest book, and seems to be threatened by a voice from her brooch. Batman has a feeling that the Kaye at the meeting is an impostor, so he looks into the matter.
Reprints
Keywords
Gotham City

Robin does not appear in this story.