The Monster-Go-Round! (Table of Contents) 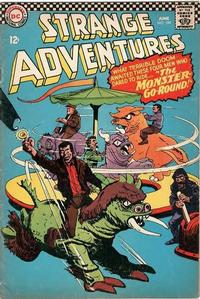 The Way-Out Worlds of Bertram Tilley (Table of Contents: 2)

References Superman: one could conclude it therefore occurs on Earth-1 or Earth-2, which have a Superman.

Job Number
6390
First Line of Dialogue or Text
I always have trouble with the small parts...
Characters
Two unnamed boys
Synopsis
One of the boys shows the other how he made a catch-all to catch small model parts that he drops.

Your Free Trip Around the World! (Table of Contents: 8)

Genre
advocacy
Characters
an old sea captain; two boys
Synopsis
After telling the boys some tales, the captain takes them to the library where they can travel anywhere just by reading.

Creator credits from a list by Lionel English, which also gives the penciller and inker as "Morris Waldinger" in one of the issues this PSA appears in.
Published in cooperation with the National Social Welfare Assembly.

Bill Donovan is mentioned only, does not appear.

The Monster-Go-Round! (Table of Contents: 11)

Genre
horror-suspense
Characters
Buddy Reed; Chuck Reed; Larzan; Mr. Collins; two unnamed friends of Buddy Reed's
Synopsis
Buddy Reed and three friends meet Larzan who has found and operates the monster-go-round. Buddy wins the prize while his friends are turned to stone and Larzan attempts to steal the prize, but Buddy frees his friends and they destroy the machine.

The Adventures of Andy and George in the G. I. Joe Club / advertisement / 1 page (report information)

Look What You Can Make with Mattel's Vac-U-Form (Table of Contents: 18) (Expand) /