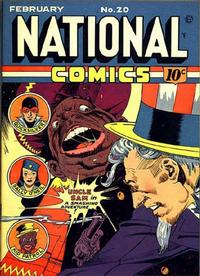 Uncle Sam refers to Buddy as his nephew in this story, but that was not biologically true. As Sam explained it, "every red-blooded American boy is my nephew!"

[Jimmy Cinch and His Heck Drivers] (Table of Contents: 2)

Art matches the Nordling sample at Jerry Bails' Who's Who.

[Madman of the Mansion] (Table of Contents: 4)

The artwork matches other signed stories by Leav.

Signed in the second to last panel on the last page.

[The Kid Criminals] (Table of Contents: 5)

[The Mine Field Plot] (Table of Contents: 6)

The artwork matches the Witmer sample at Who's Who.

[The Speed Demons] (Table of Contents: 7)

Genre
superhero
Characters
Quicksilver [Max]; Joe (villain)
Synopsis
A crime boss invents a drug that gives his henchmen ten times their normal skill. One of them, a guy named Joe, became ten times faster, but Quicksilver's guile and unpredictability swing the battle in his favor.

First Line of Dialogue or Text
So your newspaper is going to expose my murder racket, eh?
Genre
humor
Characters
Cyclone Cupid

The Island Spectre (Table of Contents: 11)

Statement of the Ownership, Management, Circulation, Etc. (Table of Contents: 12)

The Case of the Blind Peddler (Table of Contents: 13)

The art here is similar to other in this series credited to Crandall.

Lance Blackwood, according to the Who's Who, is a by-line on this strip.