Lo! The Eggs Shall Hatch! (Table of Contents) 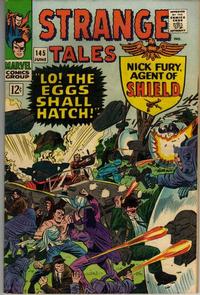 Lo! The Eggs Shall Hatch! (Table of Contents: 1)

Genre
spy
Characters
Nick Fury LMDs; Dum Dum Dugan; Nick Fury; Jasper Sitwell; The Druid; The Fixer
Synopsis
SHIELD sends out a squad of Fury LMD's attempting to track down his would-be assassin. Instead of capturing the LMDs, The Druid's eggs have been destroying them. SHIELD arrives at the site of an exploded egg which was a trap. Fury battles the Druid one-on-one worried that his men will be targeted if he fails. Sitwell drives a fleet of armored eggs from hiding while all hell breaks loose. The captured Druid brags that his main HQ is undiscovered while Sitwell offers to uncover The Druid's true identity. Noticing how ambitious Sitwell is Fury voices concern about being replaced by a younger man.
Reprints

Greater, Groovier, Goofier Goodies Than Ever, Gathered from the Four Corners of Marveldom! (Table of Contents: 2) (Expand) /

To Catch a Magician! (Table of Contents: 3)

Genre
superhero
Characters
Dr. Strange [Dr. Stephen Strange]; Mister Rasputin
Synopsis
Mr. Rasputin, descendant of the original, amasses magical & scientific knowledge in his goal of world domination. Sensing an evil presence Strange finds Rasputin who soon realizes he cannot match Strange's magic and shoots him. A hospitalized Strange informs the police about Rasputin but when they fail to find him Strange realizes he may have taken refuge at his sanctum! As Strange investigates a hit-man Rasputin hired enters the hospital to finish the job. Strange emerges victorious erasing all memory of magic from Rasputin and forcing he & his henchman to confess their crimes to the police.
Reprints

Part 16 of 17. This story is a break between the ongoing Dormammu episodes in the previous issues, which come to a climax in the next episode.

First Line of Dialogue or Text
Dear Stan, Boy, did you hit the jackpot...
Reprints