On sale date as given in the copyright application as listed in the Catalog of Copyright Entries, Periodicals, 1966, page 343, registration number B251726.
This issue has variants:

Them! (Table of Contents) 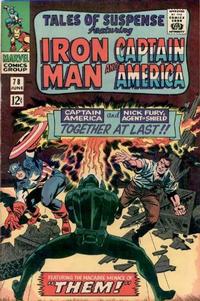 The Invincible Iron Man
Genre
superhero
Characters
Iron Man [Tony Stark]; Ultimo; Mandarin; Senator Harrington Byrd
Synopsis
Iron Man defeats Ultimo by tricking the monstrous android into setting off a long-dormant volcano! The Mandarin believes Tony Stark is dead, and vows Ultimo will live again. Shellhead steals a Commie jet and narrowly avoids getting shot down by US fighters. But on returning home, he discovers to his horror that Senator Byrd has not taken his failure to show at the sub-committee investigation lightly. Not only has Stark Industries been closed down, but there is also a warrant out for Tony Stark's arrest!
Reprints

Greater, Groovier, Goofier Goodies Than Ever, Gathered from the Four Corners of Marveldom! (Table of Contents: 2) (Expand) /

Captain America, Living Legend of World War II
Genre
superhero
Characters
Captain America [Steve Rogers]; Nick Fury; THEM (secretly A.I.M., really a division of HYDRA)
Synopsis
While Cap is in the middle of training, Nick Fury turns up looking for info on a secret organization known as "THEM". A strange flying craft lands outside Avengers Mansion, and a chemical android attacks. In a remote lab, members of "THEM" observe by remote camera, while watching over a "battalion" of androids growing like plants in a glass-enclosed hydroponic garden, due to experiments with D.N.A. Cap and Fury barely manage to stop the android. Fury tells Cap it's SHIELD's job, and to stay out of it. But he gives Cap a SHIELD "Priority A-1" badge to make getting in touch easier in the future.
Reprints

Part 1 of 5. 2nd-ever meeting of Cap and Fury, following the story in SGT. FURY #13 (December 1964). 1st on-camera appearance of "THEM", following mentions in STRANGE TALES #142-143 & 145 (March-April, June 1966). The hooded outfits worn by the evil scientists appear inspired by the ones worn in the 1st James Bond film, DR. NO (1962). Identity of "The Imperator" would not be revealed until STRANGE TALES #156 (May 1967). Cap and Fury team-up to battle mysterious invaders in the flashback in STRANGE TALES #160-161 (September-October 1967), apparently shortly after this episode. Meanwhile, this story continues directly into STRANGE TALES #146 (July 1966), while "THEM" also continue to appear (peripherally) in the next several issues of TALES OF SUSPENSE. The android-growing tanks appear to pay tribute to THE THING FROM ANOTHER WORLD (1951). Thanks to Jack Kirby, D.N.A. experiments would play a large part in SUPERMAN'S PAL, JIMMY OLSEN #133-148 (November 1970-April 1972). The "flying shock rollers" are identical to the ones used by Obi-Wan Kenobi to train Luke Skywalker in the film STAR WARS (1977)!