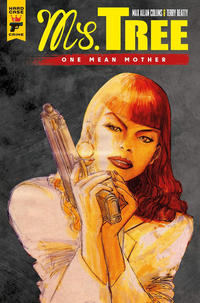 From the Pen of Max Allan Collins (Table of Contents: 1) (Expand) /

First Line of Dialogue or Text
We are not beginning at the beginning.

Recaps the publication history; Collins' decision not to reprint the series in chronological order; and why he chose to lead off with this group of stories.

Gift of Death (Table of Contents: 4)

Job Number
G-5237
First Line of Dialogue or Text
I was sleeping.
Genre
crime; detective-mystery
Characters
Michael Tree; Dominique Muerta; Rafe Valler; Mike Tree Jr.; Lisa Muerta; Effie; Dan Green; Roger Freemont; Donnie Muerta; Barney Phillips
Synopsis
Dominique Muerta tries to make peace with Ms. Tree because her daughter Lisa has been dating Tree's stepson Mike Jr. Ms. Tree rejects the offer, but then Dominique is killed. Lisa hires Ms. Tree to find the killer. Ms. Tree takes the head of security job Dominique had offered her, to the surprise and consternation of Dominique's nephew, "Don Donnie," the new head of Muerta Enterprises. Tree determines Donnie is ultimately responsible for his aunt's death, but didn't explicitly order it. The killer confesses to her, but is killed by another of Donnie's men, whom she kills in turn.
Reprints

Job Number
G-5240
First Line of Dialogue or Text
There was a time when I was very good at this.
Genre
detective-mystery
Characters
Michael Tree; Effie; William Powers; Melodie Powers; Linda DeCamp; Donnie Muerta; Rafe Valler; Roger Freemont; Dan Green
Synopsis
Ms. Tree runs into a high school sweetheart, William "Billy" Powers, who is now an unhappily married wealthy real estate tycoon. He is on the verge of divorce, and is having business problems. When his wife bursts in on them wielding a gun, Ms. Tree kills her in self-defense. As she investigates, however, she realizes Powers staged the whole scenario with the intent of having Tree kill his wife. She confronts him, and he claims he has fallen in love with her for real. He is then shot and killed by his executive assistant, who helped him with his scheme because she thought he loved her.
Reprints

The Family Way (Table of Contents: 6)

Job Number
G-6967
Genre
detective-mystery
Characters
Michael Tree; Mike Tree Jr.; Lisa Muerta; Frankie "The Loon" Muerta (dies); Don Donnie Muerta; Jenny Starr; Mrs. Starr
Synopsis
"Uncle" Frankie Muerta kidnaps Lisa Muerta in order to force cousin Donnie to offer him a leadership position in the Muerta organization. Donnie wants him out of the way, but because he's family, doesn't want it traced to him. He hires Ms. Tree, knowing her stepson is dating Lisa. She finds Frankie and rescues Lisa, but then has to be saved by Mike Jr. Afterwards, a doctor checking her out at the hospital reveals to her that she's three months pregnant.
Reprints

One Mean Mother (Table of Contents: 8)

First Line of Dialogue or Text
In the thirty-seven years since her first appearance Ms. Tree has attracted considerable Hollywood attention.

Recap of efforts to adapt Ms. Tree to film.

First Line of Dialogue or Text
My pregnancy was pretty much uneventful, with the exception of the hostage situation.
Genre
detective-mystery

From 1994. Possibly a reprint but source not indicated, and not in the GCD by that title. Basis for the film Real Time: Siege at Lucas Street Market (2001).