The caption reads six monstrous heroes, but only five are shown. 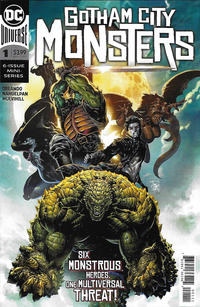 Story takes place in Monstertown while Bane is in control of the rest of Gotham City during the City of Bane storyline in Batman (DC, 2016 series) #75-85. Monstertown was previously created by Hugo Strange in the Batman: Night of the Monster Men storyline. Story also takes place after the fall of S.H.A.D.E. and Kobra as seen in the Event Leviathan mini-series (DC, 2019 series).