Art for the cover is also used as the splash page for the first story. 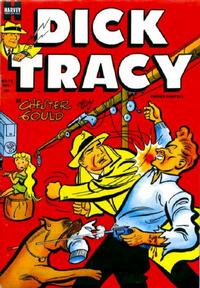 Get a New Daisy Training B B Rifle for Christmas, Pardner! (Table of Contents: 1)

Dick Tracy and the Case of the T. V. Terror (Table of Contents: 2)

Genre
adventure; drama; humor; children; crime; detective-mystery
Characters
Dick Tracy; Sam Catchem; Mugg; Sparkle Plenty; T. V. Wiggles; B. O. Plenty
Synopsis
When his attempt to kill Sparkle Plenty fails, Wiggles kidnaps Sparkle and puts her in a bass fiddle case to get her out of the studio. B.O.'s friend Gus tells him that he saw T. V. Wiggles with Sparkle, and B.O. grabs his guns and sets out after the criminal. Tracy traps Wiggles in a County Maintenance Garage and prepares to use tear gas to drive him out.
Reprints

Art for the splash is also used as the cover.
In the television studio, WGN-TV can be seen on the side of one of the cameras.

Genre
sports
Synopsis
Ad for adjutable binoculars that are worn like eyeglasses.

This ad is between pages 1 and 2 of the first story.

First Line of Dialogue or Text
Gosh, they stopped Pud on the goal line again!
Genre
children; sports
Characters
Pud
Synopsis
In a footbal game, Pud uses Dubble Bubble to blow a bubble that helps him floar across the goal line.

This is similar to a stunt used in the original version of the movie, "Son of Flubber."

Get a Real Candid Camera (Table of Contents: 5)

Look for the Big Harvey "H" for the Best in Comics! (Table of Contents: 6)

80 Million Fans follow Believe It or Not! (Table of Contents: 7)

Ripley's Believe It or Not! / promo (ad from the publisher) / 0.5 page (report information)

Genre
non-fiction
Synopsis
Ad for Harvey's newest title, Ripley's Believe It or Not.

He Won by 6 Points with AMF Roadmaster (Table of Contents: 8)

There's Everything Every Boy Wants in...Lionel Trains with Magnetic Traction (Table of Contents: 9)

Genre
children
Synopsis
Generic ad for Lionel Trains with an offer to purchase a track layout kit and the latest Lionel Train Catalog.

[Just as T. V. Wiggles draws a bead on the door through which Tracy is entering--] (Table of Contents: 10)

Genre
adventure; drama; humor; children; crime; detective-mystery
Characters
Dick Tracy; Sam Catchem; T. V. Wiggles; B. O. Plenty; Sparkle Plenty; Gravel Gertie; Mugg
Synopsis
B. O. Plenty is seriously wounded when he prevents Wiggles from shooting Tracy. In the fight between Wiggles and Tracy, Tracy dodges a steel tank thrown by Wiggles and in doing so, knocks the support out from under a storage rack. The rack collapses, and Wiggles is buried under a pile of steel parts. Thanks to Sparkle's singing, B. O. recovers.
Reprints

Hi, Folks! Now You Can Read All My Hilarious Adventures Every Month! (Table of Contents: 12)

"I've been tailing these jewel thieves for a week now" (Table of Contents: 13)

Myra solves a crime where two criminals are using a joint safety deposit box to communicate with each other.

Hand of Death (Table of Contents: 14)

Calling All Crimestoppers Mail This Order Today (Table of Contents: 15)

Free! This Entire Collection of 210 Stamps from All Over the World (Table of Contents: 18)

Genre
history; sports
Characters
Adolph Hitler
Synopsis
Ad for a stamps plus a booklet to help collectors maintain their collections.

Genre
children
Synopsis
Ad for a doll with hair that can be curles, combed and washed.