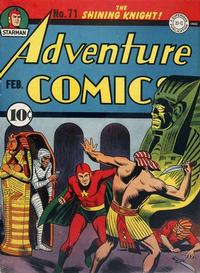 The Invaders from the Future! (Table of Contents: 2)

Genre
superhero
Characters
The Starman [Ted Knight]; Doris Lee; Woodley Allen; Police Captain Ryan; Professor Juniper Grimm; The Unknown (The Light in disguise, villain); Slugger (villain)
Synopsis
A kindly professor creates a steel time-sphere, which is stolen and used by a gang of crooks to travel into the future, who then unleash flaming thunderbolts and giants in bullet-proof suits to terrorize the citizens of today.
Reprints

The Stronghold of Savarr! (Table of Contents: 5)

First Line of Dialogue or Text
The doctor told me to smoke only one cigar a day!
Genre
humor

First Line of Dialogue or Text
I gotta get outta this one-horse town...
Genre
humor

The Justice Society Invites You to Their Next Meeting! (Table of Contents: 11) (Expand) /

First Line of Dialogue or Text
The stars look down on murder...
Genre
superhero
Characters
The Hourman [Rex Tyler]; Dr. Destiny; Jimmy Martin; Thorndyke; Minute Men of America; Henry Marshall (death); Darius Carter; Mr. Stone (villain)
Synopsis
An astrologist is fired from radio station WHON for poor ratings, but he swears revenge against the station owner and the Board Of Directors of the Century Syndicate, which operates the station.

First Line of Dialogue or Text
All I keep hearing is...
Genre
humor

Adventure of the Road of No Return (Table of Contents: 20)

Genre
superhero
Characters
The Sandman [Wesley Dodds]; Sandy [Sandy McGann]; Satan (villain, death)
Synopsis
While traveling, Wes and Sandy stop for the night at an inn, but are intrigued by a story told by the inn-keeper. In it, he mentions that the road near the inn has been traveled by many people over the last twenty years, but no one has ever returned from their journey on it, including his son.

Pencil credit verified by Paul Norris per Craig Delich, inker credit confirmed by Grothkopf, and writer identified by Jerry Bails. Norris was told to draw the story "in a Bob Kane style."

Energy to Move a Mountain (Table of Contents: 23) (Expand) /