[The Beyonder Conquers The Microverse !] (Table of Contents) 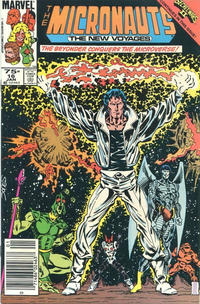 Economies Of Scale ! (Table of Contents: 1)

Cont. from Secret Wars II #6. Time Traveler is misspelled as Time Traveller in this story. This is the last 65 cent issue, the price increases next issue to 75 cents US, 95 cents in Canada and 40p in the UK.