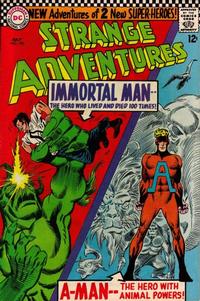 A-Man -- The Hero with Animal Powers (Table of Contents: 2)

First Line of Dialogue or Text
I asked for it-- no denying that!
Genre
superhero
Characters
A-Man [Buddy Baker]; Roger Denning; Grabo
Synopsis
Buddy Baker uses his animal powers to fight crime and learns the limitations of those powers as he pursues a gang of crooks who have a machine that can telepathically control animals.
Reprints

First Line of Dialogue or Text
President Johnson says: 'At first there seemed to be no end to the wonder of the land.
Genre
non-fiction; nature
Synopsis
Excerpts from a speech by President Lyndon Johnson regarding the preservation of nature.

Published in cooperation with the National Social Welfare Assembly, in comics form.

First Line of Dialogue or Text
My 'shocker' blast can topple a mountain-- it's bound to knock this beast out of action!
Genre
adventure; fantasy-supernatural; superhero
Characters
Kirk Jason [Immortal Man]; Helen Phelps
Synopsis
The Immortal Man uses his powers against a strange monster, sacrificing another of his lives to defeat it.
Reprints

A 2nd Star Collection of the Strange Lives of Batman and Robin! (Table of Contents: 5) (Expand) /

First Line of Dialogue or Text
For hundreds of years, travelers have periodically reported sighting the frightening Loch Ness moster in the Scottish lake of the same name.
Genre
non-fiction