[Prediction of Doom] (Table of Contents) 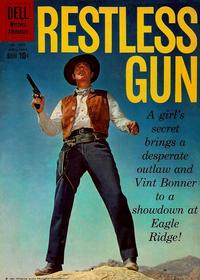 Prediction of Doom (Table of Contents: 1)

Prediction of Doom (Table of Contents: 2)

Genre
western-frontier
Characters
Vint Bonner
Synopsis
Vint Bonner comes to Eagle Ridge, an uncommonly peaceable town in a rough area. An old woman warns Bonner that the peace will soon end. And it does shortly, with the bank being robbed. Bonner shoots one of the gang and puts him in the town jail. The old woman tells Bonner that a girl named Amy was the cause of the peace and that the peace ended when she left the week before to be married. Bonner goes to see the girl, but doesn't learn anything. The next night the gang returns to free the prisoner and while Bonner is chasing one of the gang, the others go to the jail, shoot the sheriff, and free the prisoner. As Bonner and the others assess the situation, the girl, Amy, enters and tells them that the leader of the gang is her father. He had left the town alone as long as she lived there. Amy takes Bonner and four other men to the gang's hideout.

The Trial (Table of Contents: 3)

Genre
western-frontier
Characters
Vint Bonner
Synopsis
Vint Bonner interrupts the hold-up of a wagon with a mining company payroll. He wings one robber, but the others escape. Bonner stays to testify against the robber, who is sentenced to jail. On the way to prison, the robber is freed by his partners. He vows revenge on Bonner. The gang captures Bonner, holds a trial in a kangaroo court, and sentences him to death.

Inside back cover; black and white. Mostly text with four illustrations. Pencils and inks credits for this sequence from Alberto Becattini (May 14, 2007)