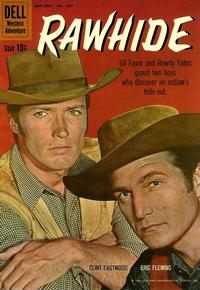 The Outlaw Trail (Table of Contents: 1)

Inside front cover; black and white. Two small photos plus one panel for each story with text underneath.

The Outlaw Trail (Table of Contents: 2)

Genre
western-frontier
Characters
Gil Favor; Rowdy Yates; Wishbone
Synopsis
Two young boys try to join the trail herd after they stumble across the hideout of Cram Kincaid and his outlaw gang. After Kincaid tries to kidnap the boys from the camp, Favor and Yates leave to take the two boys back home. On the way they are ambushed by members of the gang, who are in turn run off by the Sheriff and the boys' fathers who have been searching for them. The boys then lead the men to the outlaws' hideout.

Genre
western-frontier
Characters
Gil Favor; Rowdy Yates, Wishbone
Synopsis
After taking the chuck wagon to get supplies for the trail crew, Wishbone is stopped by two outlaws who take him and the supplies to their hideout. There they make Wishbone tend to the bullet wound of their partner and make them supper. Favor and Yates find the trail and arrive on the scene just as the outlaws and Wishbone flee from the cabin that Wishbone has intentionally set on fire with his cooking.

Last panel is Dell's "A Pledge to Parents." Script credit for this sequence from Alberto Becattini (May 14, 2007).

Sure Crossing (Table of Contents: 4)