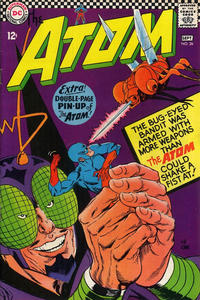 The Eye-Popping Perils of the Insect Bandit! (Table of Contents: 1)

A Handful of Wishes, the Atom (Table of Contents: 4)

Pin-up in centerfold. Appears between pages 13 and 14 of the main story.

Command Your Own Missile-Firing Tank in Battle (Table of Contents: 10) (Expand) /