Jim Vadeboncoeur Jr at GoldenAgeComics credits this to Suchorsky, and it may well be, although the bubbles are different from his cover of the next issue, as is the big bolt cutter. And some of his detailed inking is missing. 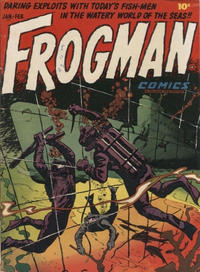 Suchorsky is credited to Frogman by Jerry Bails' Who's Who, and this is certain Suchorsky work, with his detailed inking, rounded ears and bulging lower lips as on page 3 and 4. He had many stories in GI Joe. Also JVJ credits Suchorsky. Aamodt is the only writer credited to Frogman 1952-53, but there may have been others.

Genre
crime
Characters
Sam Chase (undercover man and frogman); Lyman (shipyard owner)
Synopsis
Units of priceless chemicals have been disapperaing from the lab at the shipyard, and Sam Chase is put on the case.
Reprints

Prentice is credited to war stories for 1952-53 at Hillman by Jerry Bails' Who's Who, and his sober faces are not to be mistaken. Just think of Rip Kirby and you have him.

The Iron Prowler (Table of Contents: 4)

Genre
non-fiction; war
Synopsis
From the first American submarine "The Turtle" in 1742, to the US subs of World War II.
Reprints

Willie Needs Us (Table of Contents: 6)

Genre
war
Characters
Willie (O.S.S. Agent); Pierre (French resistance man)
Synopsis
Before the invasion of Normandy, an American O.S.S. Agent sends a message in code about a German rocket launcher that has to be destroyed by frogmen.
Reprints

Jim Vadeboncoeur Jr at GoldenAgeComics has John Daly as best guess and a possible Zolnerowich.
The heavy "S" inside the ears is like Zolnerowich's signed work on "Captain Terry Thunder" in Jungle Comics #107, and some hands and "diving" persons are exactly similar in both of these stories.

Genre
war
Synopsis
A US Navy demolition team at work in the Pacific.
Reprints

The Frogman Takes a Bunker (Table of Contents: 8)

JVJ (Vadeboncoeur) has Smalle/Abel credited here, and Smalle is credited on both pencils and ink at Hillman 1952, but not war stories, while Abel is credited to ink on war stories. Both are very probable when looking at faces and inking.

Double-Cross in the Deep (Table of Contents: 9)