Suchorsky is credited to Frogman in Jerry Bails' Who's Who, and the inking and faces are his work. Also credited by JVJ. 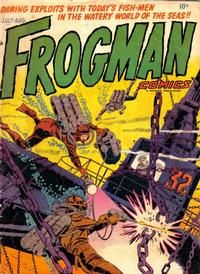 A Medal for Mickey (Table of Contents: 2)

The Underwater Stoppers (Table of Contents: 3)

McCann is credited to war stories at Hillman 1952-53, and this is him with a lot of black inking, old faces with long noses, no chin and pointed ears. Also the caps are pointed in front and there is very little movement.

The Mounted Frogmen (Table of Contents: 4)

Inking of the propeller may point to Bjorklund, and he is credited to war at Hillman. Jim Vadeboncoeur Jr has this credit too.

Genre
war
Characters
Joe Dawson (machine shop owner); Clyde Dawson
Synopsis
Clyde discovers that the oxygen tanks his father is making don't stand up to pressure tests, but his father refuses to stop the shipment to the navy
Reprints

Suchorsky is credited to Frogman in Jerry Bails' Who's Who, and this work is identical to his "Sea Witch" stories in "Pirate Comics", also credited by Bails. He can be noticed by his rounded ears and lips, and detailed inking. Jim Vadeboncoeur Jr has him credited too.

First Line of Dialogue or Text
The basic principle of rocket propulsion...
Genre
non-fiction; aviation
Synopsis
The first rocket to carry passengers in India 1913, and other peculiar facts from the air.

The Riders of the Warheads (Table of Contents: 10)

Art credits from Jim Vadeboncoeur Jr. Ross Andru is credited to war stories at Hillman by Jerry Bails' Who's Who.