Art identification from Jim Vadeboncoeur Jr Collection. Prentice is credited to war stories 1952-53 at Hillman by Jerry Bails' Who's Who. 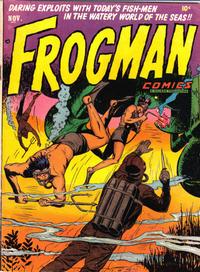 Art identification from Jim Vadeboncoeur Jr Collection. Both Roy and Abel are credited to war stories 1952-53 at Hillman by Jerry Bails' Who's Who.

The Sawdust Target (Table of Contents: 3)

Zolnerowich is credited to working at Hillman by by Jerry Bails' Who's Who, and this art is exactly identical to his credited story "Color Blind" in Hillman's Crime Detective v1 #10. Compare face and nose page 3 panel 5 with page 1 panel 3 in "Color Blind".

The Ice Frogs (Table of Contents: 6)

The Sunken Viking (Table of Contents: 8)

Suchorsky is credited to Frogman in Jerry Bails' Who's Who, and this work is identical to his "Sea Witch" stories in "Pirate Comics", also credited by Bails. He can be noticed by his rounded ears and lips, and detailed inking.

Art idenitification from Jim Vadeboncoeur Jr Collection. Morey worked for Hillman in 1948-51 and Becker on ink in 1952-53 according to Jerry Bails' Who's Who..