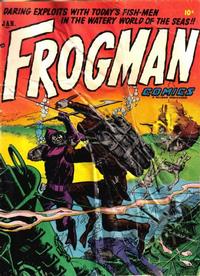 Trade In Your Job For Excitement (Table of Contents: 1) (Expand) /

Suchorsky is credited to Frogman in Jerry Bails' Who's Who, and this work are identical to his "Sea Witch" stories in "Pirate Comics", also credited by Bails. He can be noticed by his rounded ears and lips, and detailed inking. Jim Vadeboncoeur Jr has him credited too.

Genre
spy
Characters
Dick Cornis (frogman); Frank Mulligan (frogman); Cpt. Foley
Synopsis
The crew and frogmen of a U.S. destroyer in the North Sea are all curious about an odd passenger, Mr "Q", of O.S.S., who is to be escorted on a special mission.
Reprints

John Daly is credited to war stories at Hillman 1952-53. The art has similarities with signed Daly work in Hillman's Western Fighters, but not certain. Jim Vadeboncoeur Jr Collection has one unknown artist spelled McAArole and Savage. Compared with Bill Savage work at Atlas/Marvel, I can't find much identical inking.

Bjorklund is credited to war stories at Hillman in 1952-53 by Jerry Bails' Who's Who. He drew "Tex Granger" for Parents Magazine, and can be recognised by his faces with marked jaws and sketchy ears with large lobes.

Diary of the Ice (Table of Contents: 6)

Operation Back Door (Table of Contents: 7)

Genre
war
Characters
Robert Lloyd (tunnel expert); Lt. O'Hara
Synopsis
An American specialist in tunnel work has disappeared in Tokyo and is supposed to have been abducted by North Koreans.
Reprints

McCann is credited to war stories at Hillman 1952-53, and this is him with a lot of black inking, old faces with long noses, no chin and pointed ears. Even the caps are pointed in front and there is not much movement.

Frogman to the Gulf (Table of Contents: 8)

Art ID from JVJ Collection. Zolnerowich worked for Hillman, but Nicholas is not credited by Jerry Bails' Who's Who.

Get These Dresses (Table of Contents: 9) (Expand) /