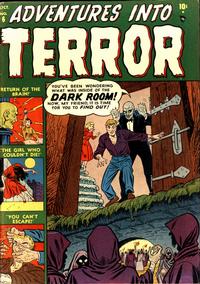 The Return of the Brain (Table of Contents: 1)

Job Number
8676
Genre
horror-suspense
Synopsis
More adventures of the evil head that lives and moves without the benefit of a body.
Reprints

Follow-up of story in Adventures into Terror #5

Vehicle of the Dead (Table of Contents: 2)

You Can't Escape (Table of Contents: 3)

Job Number
8596
Genre
horror-suspense
Synopsis
Breaking the fourth wall a Vampire addresses the reader, his intended victim. He tells how he first encountered his victim-to-be when he asked for help and was rebuffed. The vampire followed the reader, discovering where he lived and what comics he liked to buy. He spent considerable money printing up a custom copy of Adventures into Terror to place on the newsstand. The last panel of the story shows the vampire with claws extended and fangs bared - daring you to look over your shoulder.
Reprints

The Dark Room! (Table of Contents: 4)

Job Number
8536
Genre
horror-suspense
Synopsis
A boy goes to live with his uncle who, unknown to the boy, practices black magic. The boy is saved from evil by the misshapen manservant.
Reprints

The Girl Who Couldn't Die! (Table of Contents: 5)