Where Monsters Dwell! (Table of Contents) 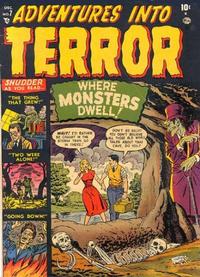 The Thing That Grew! (Table of Contents: 1)

Job Number
8793
Genre
horror-suspense
Characters
Joshua Borglum; Blakely
Synopsis
Professor Borglum creates a new life when his blood is accidentally mixed with an experiment. When it continues to grow and kill people for their blood he tries to find a way to kill it.
Reprints

Job Number
9139?
Genre
horror-suspense
Synopsis
The elevator operator of a hotel considers committing a theft until he dreams of going to Hell.
Reprints

The Two Were Alone! (Table of Contents: 4)

Where Monsters Dwell (Table of Contents: 5)

Job Number
8773
Genre
horror-suspense
Synopsis
A scientist uses a projector that banishes people he dislikes to another world. A light indicates where the beam connects both worlds and one of the men returns. He shoves the scientist through the aperture where he is killed by the natives. Other victims rush forward hoping to escape but the man switches off the device. The story ends with the man uncertain what to do: turn the beam on and rescue the other victims which might allow the attackers to pour through, or shut it off and condemn them to die. He addresses the reader directly, asking "What would you do?"
Reprints

Job Number
9205
Genre
horror-suspense
Synopsis
A man starts a gag that he has an invisible goon that takes care of his grudges for him, but soon the 'coincidences' rack up...
Reprints