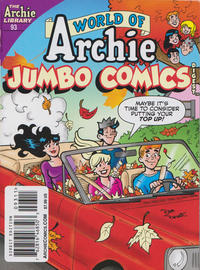 The Facts of Leaf (Table of Contents: 2)

Autumn in Riverdale (Table of Contents: 3)

Take-Out and Deliver (Table of Contents: 4)

Jughead
Genre
humor; teen
Characters
Jughead Jones; Reggie Mantle
Synopsis
Jughead fakes an injury to get Reggie to help him with his job of delivering Chinese food to customers.
Reprints

There is a one page splash done like a movie poster with title and credits. The story is four 5 page chapters:
Chapter 1 titled "Rumblings!"
Chapter 2 titled "Cravings"
Chapter 3 titled "Explanations"
Chapter 4 titled "Indigestion"

A Good Investment (Table of Contents: 18)

Archie at Riverdale High
Genre
teen
Characters
Archie Andrews; Jughead Jones; Svenson
Synopsis
Archie gets trapped in an elevator shaft at the school and must be rescued by Jughead and Svenson.
Reprints

The Power of a Woman (Table of Contents: 19)

The Plumber's Helper (Table of Contents: 20)

First Line of Dialogue or Text
Darn! The pipe under the sink is leaking! I'd better call the plumber!
Feature Logo

No Contest (Table of Contents: 24)

The Archies
Genre
teen
Characters
Archie Andrews; Jughead Jones; Reggie Mantle; Betty Cooper; Veronica Lodge; Chester Snavely
Synopsis
Archie and Jughead meet a storekeeper who agrees to put up a poster for their concert only after they clean his window display, and even then he tries to cheat them.
Reprints

How Could You Stoop So Low? (Table of Contents: 29)

The 3 Stoops are a parody of the 3 Stooges.

First Line of Dialogue or Text
Let's see you go out for a pass, Archie!
Feature Logo

Climber with a Cause (Table of Contents: 31)

Fear of Flying (Table of Contents: 32)

Cross out the opposites puzzle.

Credits are listed as "Taylor/Costanza/Lapick". As John Costanza and Rudy Lapick are both inkers, it is doubtful they both inked this story. The GCD index of the original printing states John Costanza as inker, which may be where the credit listed in this printing is sourced. Rudy Lapick would be a normal inker for a Dexter Taylor Little Jughead story.

[Subscribe Today and Save at store.archiecomics.com] (Table of Contents: 39) (Expand) /

First Line of Dialogue or Text
I can't get a boy to take these books up to Miss Grundy!
Feature Logo

The Contest (Table of Contents: 46)