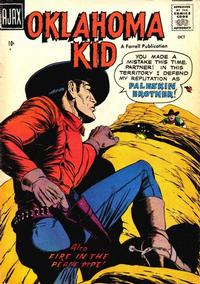 Fire in the Peace Pipe (Table of Contents: 1)

Originally a story in the Apache Kid feature titled "Duel of Doom."

The Old Timer Is a Two-Timer! (Table of Contents: 2)

The Rifle Ransom (Table of Contents: 4)

The character originally called John Martin is just called "Colonel" here. Mary was originally his bride-to-be, but here is called his daughter and his niece.