Spidey and the Green Goblin...Both Unmasked! (Table of Contents) 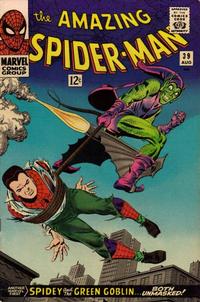 How Green Was My Goblin! (Table of Contents: 2)

First Line of Dialogue or Text
By now, that web-crawling weasel must have forgotten all about the Green Goblin!
Genre
superhero
Characters
Spider-Man [Peter Parker]; Aunt May Parker; Anna Watson; Flash Thompson; Gwen Stacy; Harry Osborn; Ned Leeds; J. Jonah Jameson; Green Goblin [Norman Osborn] (identity revealed, villain); Professor Stromm (cameo flashback)
Synopsis
Peter heads to the doctor with the sniffles and learns that Aunt May's health is very fragile. Spider-Man is roped into tangling with a bunch of goons who zap him with a mysterious gas. Not realizing that the gas has weakened his spider sense, he changes into Peter Parker under the watchful gaze of the Green Goblin. The Goblin confronts Spidey outside of his home and captures him as Peter is worried that Aunt May might be overcome by the commotion. Trussed up in the Goblin's lair, Peter is shocked when the Goblin takes off his mask and reveals himself to be Norman Osborn.
Awards
Reprints

First Line of Dialogue or Text
Who's the wiseguy that's holdin' out?
Characters
Thing; Spider-Man
Reprints