The on-sale date is the publication date given in the U. S. Copyright Office filing.

This underground comic was an anti-animal-vivisection benefit book. It is most noteworthy for Art Spiegelman's three-page precursor story to his graphic novel Maus: A Survivor's Tale.

Published in San Francisco, California. The print run is not indicated in the book. According to Jay Kennedy's The Official Underground and Newage Price-Guide (1982), the print run was in the 20,000-30,000.

Editor Terry Zwigoff later became known as a filmmaker. His films include Crumb (1994), Ghost World (2001), and Art School Confidential (2006), which are based on comics or are otherwise comics-related.

[Join the Kollege of Karnal Knowledge With the Cute Li'l...] (Table of Contents) 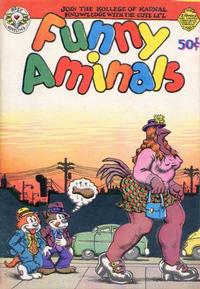 Inside front cover. Initially this comic book was brought about because of the horror Zwigoff had experienced after visiting a slaughterhouse. He wanted to come out with a statement against cruelty to animals. Needless to say, the stories that were submitted did not reflect this statement of purpose. As Crumb stated in the Complete Crumb volume nine, Zwigoff relinquished his editorial position and did not want to have anything more to do with the final results.

The Working Girl (Table of Contents: 4)

The Toadette King (Table of Contents: 7)

This Bitter Earth (Table of Contents: 8)

The Sage Monkey Debuts and Dies.

Stinky the Pig (Table of Contents: 9)