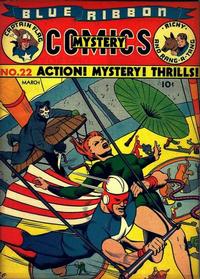 [The Sacrifice] (Table of Contents: 2)

[The Fingerless Corpse] (Table of Contents: 3)

Genre
superhero
Characters
The Fox [Paul Patton]; Ruth Ransom (reporter); The Mandarin (villain, introduction, death)
Synopsis
A rash of fingerless corpses found in the East River attracts the attention of reporter Ruth Ransom, so she tracks the murders to a hidden opium den in a Chinese museum and is captured by the man only known as the Mandarin. Luckily for her, she was followed by the Fox who rescues her from the death trap and sends the Mandarin to the doom he granted so many others: a pit with a ladder whose rungs conceal blades that slice the fingers when grabbed.

Originally pencils were credited "Bob Montana ?", but with all the slim figures and heads at an angle popping in from the panel borders, it must be King on pencils.

[The Last Mission] (Table of Contents: 4)

Next appearance in Pep Comics #26.

Originally credited "Warren King?", but none of his sleek figures or heads popping out of the borders are found.

next appearance in ZIP COMICS #26
Originally credited to Sam Cooper, but this is the same art as on the signed Mr. Justice story in #21, Jim Phillips.

Originally credited "Warren King?", but none of his sleek figures or heads popping out of the borders are found. This is the same unknown artist that made some Fran Frazer and Zambini stories. Notice very narrow and pointed ears, and long creepy fingers.

[The Ghost of Rogers] (Table of Contents: 8)

Next appearance in Jackpot #5.