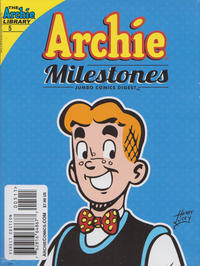 Introduction to the next section featuring Halloween stories.

Touch and Go (Table of Contents: 3)

Archie
Genre
humor; teen
Characters
Archie Andrews; Veronica Lodge
Synopsis
Archie and Veronica go to a scary movie but it's not Veronica that gets scared.
Reprints

The Escort (Table of Contents: 4)

Betty and Veronica
Genre
humor; teen
Characters
Betty Cooper; Veronica Lodge; Jughead Jones; Geraldine Grundy; Waldo Weatherbee; Hiram Lodge; Archie Andrews; Reggie Mantle; an unnamed monster
Synopsis
Veronica thinks that a monster roaming the halls of Riverdale High is really Archie in disguise. She even gets him to take her to a dance on Saturday night where all the students have to dress up like monsters.
Reprints
Keywords
costumes; dance; monster; vampire

The Snack Monster (Table of Contents: 5)

Jughead
Genre
teen
Characters
Archie Andrews; Jughead Jones
Synopsis
After consuming a large quantity of food, Jughead has a nightmare about a monster in the bathroom.
Reprints
Keywords
nightmare

Sabrina
Genre
fantasy-supernatural; teen
Characters
Sabrina; Aunt Hilda; Don
Synopsis
Sabrina's date brings a scary movie for them to watch, but he's the one that ends up scared by a night at Sabrina's house.
Reprints

A Monstrous Halloween (Table of Contents: 8)

The Haunted House on Halloween Hill (Table of Contents: 12)

Dexter has no last name in the story but his henchman makes a few cracks about him being a former cartoonist so presumably Dexter Taylor put himself into the story.

The House on Oak Street (Table of Contents: 14)

A Party for Ghosts (Table of Contents: 17)

The Mystery of Dr. Klaws (Table of Contents: 19)

First Line of Dialogue or Text
Archie, if you're that thirsty, I'll get you a glass of water!
Feature Logo

The Legend of King Koala (Table of Contents: 22)

Parody of the movie King Kong, including the battle between King Koala and a dinosaur and also the koala taking Veronica and climbing a skyscraper.
Clark Kent is seen walking away from a phone booth as Archie approaches.

Secrets of the Deep (Table of Contents: 26)

That Far Out Feeling Part One (Table of Contents: 31)

Spaced Out (Table of Contents: 32)

The Rat Race For Space! (Table of Contents: 33)

Genre
humor; science fiction
Characters
Pink Martian Man; Johnny; unnamed girl; Archie Andrews (cameo, on future television); Veronica Lodge (cameo, on future television)
Synopsis
A young boy and girl ask the Pink Martian Man to take them to 3019 because 2019 is too boring. The kids imagine the advantages of the future, but the Martian reminds them that school will be much harder. The kids decide to stay home.
Reprints
Keywords
fish bowl; future; homework; robots; space helmet; wrist telephones

Spaced Out (Table of Contents: 36)

The Wrong Impression (Table of Contents: 38)

[Subscribe Today and Save At store.archiecomics.com] (Table of Contents: 39) (Expand) /

The Perilous Past (Table of Contents: 42)

Genre
science fiction; teen
Characters
Veronica Lodge; Archie Andrews; Betty Cooper; Jughead Jones; unnamed man from Altera
Synopsis
Archie, Betty, and Veronica land on the planet Altera to find out who snatched Jughead while spacewalking. They notice that while Altera is more advanced technologically than Earth, all their decor is from the Victorian era. It turns out that one day a 1910 Saws and Rearbuck mail-order catalog fell from the sky (apparently from a time capsule launched from Earth), and Alterans treated it as sort of a bible. And because a picture of Mr. Rearbuck on the title page of the catalog looked similar to Jughead, Altera decided he was the "great spirit" Rearbuck, and treated him like royalty.
Reprints

"Saws and Rearbuck" is an obvious parody of Sears and Roebuck. An early 20th-century car on the planet looked remarkably similar to Archie's jalopy, but in green.