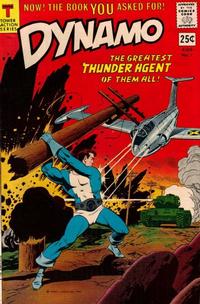 Menace from the Moon! (Table of Contents: 1)

Genre
superhero
Characters
Dynamo [Leonard Brown]; Noman; Alice
Synopsis
Observatories on Earth are being mysteriously destroyed. The President of the United States calls Noman and Dynamo in for a mission to investigate the suspected source of the destruction, a military base on the moon. Noman discovers a civilization living on the dark side of the moon who wishes their existence to remain unknown to mankind.
Reprints

A Day in the Life of Dynamo (Table of Contents: 2)

Genre
superhero
Characters
Dynamo [Leonard Brown]; Red Dragon; Red Star; THUNDER; Iron Maiden; Subterraneans; Overlord
Synopsis
Len Brown plan on asking the Chief for a raise, but before he can get to it, adventure whisks him away. First to Hong Kong, where he is at the mercy of the Red Dragon, then to the subterranean world, where he must stop the Overlord's ambition of creating nuclear Armageddon on the surface world. Help comes in the unlikely guise of the Iron Maiden. By the end of the adventure, Len finds that his chance to ask for a raise has passed him by.
Reprints

Back to the Stone Age! (Table of Contents: 3)

Plot and script by Battersby; revised by Wood and Adkins. Info from Battersby's work records as published in Alter Ego # 152, May 2018.

Characters
Weed [William Wylie]; Dynamo [Leonard Brown]; Lightning [Guy]; Chief; Noman; Doctor Oom (villain)
Synopsis
Weed is an ordinary THUNDER agent with no special suit or powers, and he envies the others. Doctor Oom, a villainous master of telepathy and hypnotism, exploits Weed's envy by planting the hypnotic suggestion that he really has superpowers. Oom lures the super-powered members of THUNDER into a trap, and it takes Weed's wit and bravery to save the day for THUNDER.
Reprints