Originally advertised for October 2019 release.
This issue has variants: 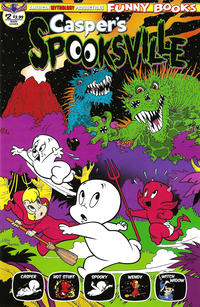 Genre
children; fantasy-supernatural
Characters
Casper; Hot Stuff; Wendy; Spooky
Synopsis
Casper and his friends chase after the aliens who have stolen their favorite items. Hot Stuff gets his trident back after the aliens use it to rejuvenate a dying planet, but they fly off again without returning Wendy's wand or Spooky's derby.
Keywords
space aliens

The Drop-Ins (Table of Contents: 2)

One of the ghosts in this story (presumably the one formerly known as Fatso) has been renamed Sloppy, but inconsistent placement of word balloons confuses the issue.

Digging up Trouble (Table of Contents: 4)