Flee For Your Life! (Table of Contents) 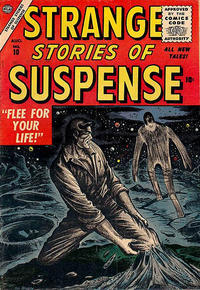 The Weeds (Table of Contents: 1)

Job Number
J-778
Genre
fantasy-supernatural
Synopsis
Sailors enter the Sargasso sea and find that the seaweed there prolongs life and slows awareness of time when eaten because, when a hurricane develops and they are able to take advantage of the winds to leave the small island that they were marooned on, they come back to a futuristic port many years after they started.
Reprints

In the Shadows (Table of Contents: 2)

Job Number
J-620
Genre
fantasy-supernatural
Synopsis
When a man gets in a plane crash, a creature from another dimension offers to heal his wounds if he will love it. He agrees, but he notices odd things about the woman over time and she admits to him that she is not human. She begs him to forget what she has told him, but he backs away from her, so she transports him back to the scene of the crash. The creature heals him once again, but this time, disappears forever leaving the man with a strange sense of loss.
Reprints

Flee for Your Life! (Table of Contents: 3)

Job Number
J-645
Genre
science fiction
Synopsis
When a Martian father tells his son that things are bad on Mars, he tries to get an Earth couple to adopt him, but they realize he is a Martian and plan to turn him over to authorities. The boy flees, and spends years as a thief just to get by. After finding his sister, who has married a human and produced children without green hair like he has, he decides to use the flying saucer his father left behind to return to Mars in hopes that things are better there now.
Reprints

The Secret of the Black Forest (Table of Contents: 4)

Job Number
J-688
Genre
science fiction
Synopsis
A visitor from Jupiter finds the humans ungrateful to him when he attempts to build them modern domiciles.
Reprints

Genius for Trouble (Table of Contents: 5)

The Crisis! (Table of Contents: 6)

A plot similar to "Fantastic Voyage"

The Long Sleep! (Table of Contents: 7)

Job Number
J-745
Genre
science fiction
Synopsis
A scientist looks down on the laborer that he has construct his suspended animation cabinet, but after awaking one thousand years in the future, he finds that he has only enough mental capacity for manual labor and comes to be content with his place in society.
Reprints