On-sale date is publication date in Catalog of Copyright Entries, 1966 Periodicals, page 336.
This issue has variants:

Second full DR. STRANGE cover; alternates with SHIELD until end of run in STRANGE TALES #168 (May 1968). 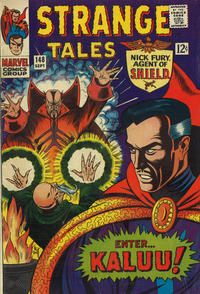 Death Before Dishonor! (Table of Contents: 1)

Genre
spy; superhero
Characters
Nick Fury; Dum Dum Dugan; Jasper Sitwell; Count Bornag Royale (A.I.M.); A.I.M. (division of "THEM")
Synopsis
Dugan is shattered when he thinks Fury is killed in a fire-bombing attack by A.I.M., only to discover it was actually a Life Model Decoy. Fury realizes their movements are under video-surveillance by the enemy. Count Royale and his A.I.M. cohorts are amazed at how sophisticated the L.M.D.s are and plan to steal one. While Fury submits to a trial a squad of A.I.M. men break into SHIELD's underground base. Fury shatters a viewport on the Heli-Carrier and leaps out to apparent death - but Sitwell equipped him with a parachute. Fury is met by Dugan as they prepare to take on A.I.M.
Reprints

Part 4 of 5. The pen-radio Fury uses is similar to the one regularly used by agents on THE MAN FROM U.N.C.L.E. tv series.

Capricious Commentaries, Carefully Cooked-Up to Confuse and Confound You! (Table of Contents: 2) (Expand) /

The Origin of the Ancient One! (Table of Contents: 3)

Genre
superhero; fantasy-supernatural
Characters
Dr. Strange; The Ancient One; Kaluu
Synopsis
The Ancient One tells Strange of his early life in Kamar-Taj, a hidden land in the Himalayas. He & Kaluu were born there, but while Strange's mentor sought to use magic for good, Kaluu dreamed of power. Kaluu mentally gained control of the people, imprisoned his once-friend, and enslaved neighboring lands. The Ancient One eventually used a spell to strike, inadvertently causing the people to suffer, no longer immune to diseases. Kaluu fled to another dimension while The Ancient One left Kamar-Taj, swearing to use his magic to help others. In the present Kaluu prepares to seek his revenge.
Reprints

Part 2 of 22. Before its corruption, Kamar-Taj was remarkably similar to Shangri-La in the film LOST HORIZON (1937). This is fitting, considering Dr. Strange's resemblance to the film's star, Ronald Colman.

First Line of Dialogue or Text
Dear Stan, You know we Marvel fans aren't ones to complain...
Reprints